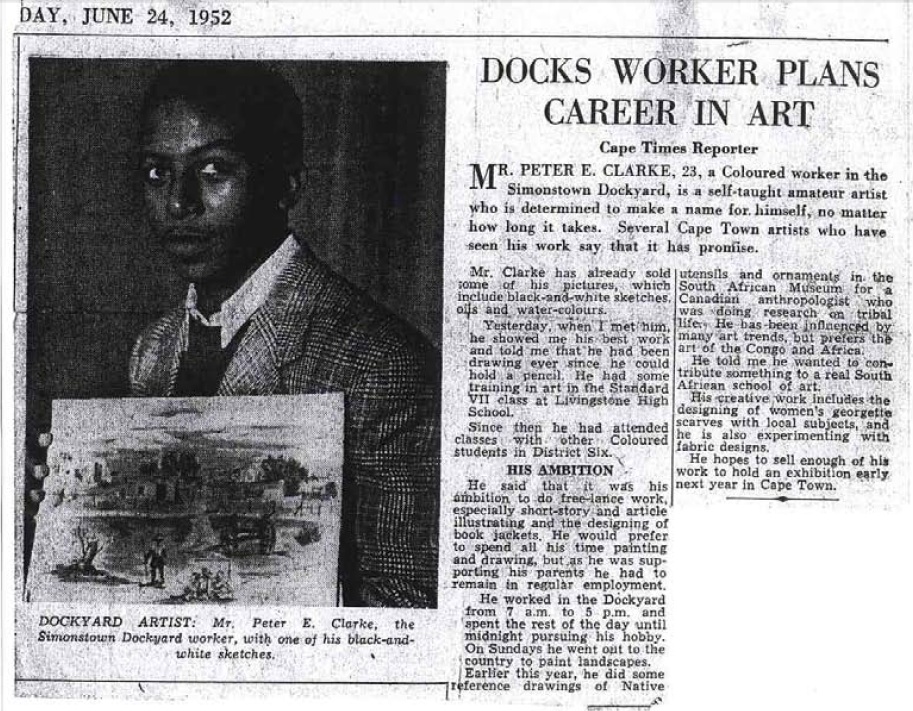 Clarke works from his home in Ocean View, Cape Town. He has never had his own studio and this fact impacts upon his work. Printmaking can be awkward if not impossible in a small space and this restriction has helped trigger Clarke’s recent move to alternative media.

The confines of home have also impacted on the scale of his work. Small artworks are more practical and Clarke says his work has therefore tended to be smaller. He says: “I do make tiny prints at home but one has to improvise terribly and [working from home] does have an impact on size and the amount of prints you can produce.”

Clarke works consistently, interspersed with other activities, in a natural rhythm that oscillates between writing and art making. “I work when the idea strikes. I don’t have a regime; while I work the ideas come. I’m not interested in waiting around for the muse,” he says.

Clarke’s poetry has more recently taken a back seat – largely because it requires substantial reflection. Clarke says: “Writing about a character is one thing but one needs to spend more time on poetry. It makes more demands.”

Clarke is working on a series of collages, several of which are currently on exhibition at the AVA in Cape Town. Each artwork comprises a fan constructed with a particular person in mind. The character could be historical, Biblical, a literary figure, or drawn directly from Clarke’s life. Below the fan are a few paragraphs of beautifully written text describing that particular person’s thoughts. In some cases, as for artist Helen Martins, the words are lifted from their actual writings. In other cases, Clarke creates dialogue that he imagines would represent their thought process. The fan series therefore draws on both Clarke’s visual and literary talents – a fitting culmination of talents for an artist approaching 75 years of age.

Two years ago, Clarke had a residency at Caversham graphic workshop in Natal. He says: “The conditions were ideal so one can’t help feeling inspired. I happily worked on a bigger scale – and that is what I would like to do with my next print.”

Clarke began working three or four years ago on collage books that fold up into boxes of various shapes and sizes that he handcrafts from leather. He says he draws much of his inspiration for these books from music: “A lot of them are inspired by jazz, although I’m more of a classics person. I enjoy music very much because my father always had a collection of records so music was heard quite a lot. I enjoy listening to music and expressing it in a different way.”

Clarke says of his books: “You can’t fold up a Monet or a Cezanne or any precious work of art. But with one like this, you can fold it up and carry it in a little box. You can sit next to somebody in a waiting room and say: ‘I’ve got something to show you’ and lift it out its box.”

And Even Before that

Clarke, at 74 years of age, has participated in so many exhibitions and appeared in such a myriad of journals that keeping track is a full-time job. He has appeared in many solo and group exhibitions in South Africa and abroad – as the list shows.

His life also spans a tumultuous period in South African history that saw both the instigation and later the demise of apartheid. Clarke says democracy has ushered in a decade of “very exciting” South African art: “Democracy created a lot of mental freedom and there are a lot of positive things happening. There is a great variety of themes, media and modes of production. There is also a lot of junk, but that is inevitable. In the process of finding oneself, one will always produce things that are not up to very high standards. But it is all part of the process and part of expression. It is quite exciting to see what is being produced in South Africa today. We can go to the rest of the world and show what is being made here.” a waiting room and say: ‘I’ve got something to show you’ and lift it out its box.”

Clarke is continuing with making his collage books. “The idea is just to have fun – like picture books for children, which take them into another world. These are meant to act in the same way. It’s just the artist in old age indulging in fun and games. I just want [viewers] to feel happy, not to look for a reason or a heavy explanation. It’s just shape and colour and forms for enjoyment.” This sense of fun is extended into the gallery when these books are on display. Clarke likes the fact that they break through the usual ‘look-but-don’t-touch’ environment.

Clarke’s series of fans is ongoing and he says he will not stop creating new characters in a hurry. However, he is intrigued by the idea of working on an “enormous” scale in print at some point because of the experimentation and exploration it allows.

Clarke produces collage with recycled paper and found objects, leather, metal, glass; he is also a graphic artist in particular known for his woodcuts; a writer and a poet.